Nursery Cryme at The Oak 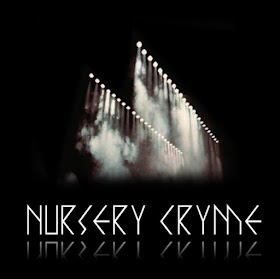 I have admitted several times in recent years that I was never was much of a Genesis fan and now, finally, I might be beginning to change my mind.

I probably would have gone to see Nursery Cryme at The Oak anyway, as long as I had found out about it, and a couple of good nudges meant that I had to go.

The first nudge came from their bassist, Oran Halberthal, who I first came to know when he played with Echoes then came to know better when we bumped into each other regularly at the Fox and Duck.

The second nudge came from various friends who were also interested in going to the gig.

I took the opportunity to walk to The Oak, steps were still being counted, and arrived there pretty close to 9pm and just a few moments before the band was due to start, time enough to get my first pint and join the others at one of the high tables at the back of the seating area.

Nursery Cryme take their name from Genesis' third album released in 1971 and that sets them very much in the "early Genesis" phase, though there was some discussion on our table when this was stretched to include 1978's ...And Then There Were Three... Personally I'd draw the line at 1976's A Trick of the Tail, though I recognise that including the first, and only the first, post Gabriel album is hard to justify. At least we all agreed that the early proggy stuff was better than that later dancey stuff.

They opened with Watcher of the Skies and took it from there with songs like Get Em Out By Friday, Squonk, The Musical Box, The Return of the Giant Hogweed, Carpet Crawlers, I Know What I Like (In Your Wardrobe), In the Cage and Trick of the Tail. There were more songs than that but you get the idea. 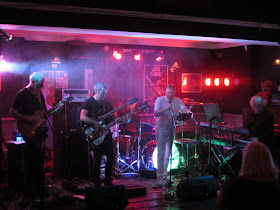 Despite claiming not to be a Genesis fan I found that I knew almost all of the songs reasonably well, though nothing like as well as Kate who seemed to sing along to every word of every song and to enjoy herself mightily while doing so. The rest of us were very happy too.

The songs have their merits but they need good musicians to tease the merits out and that is exactly what Nursery Cryme did. To be honest, I expected less from a pub band who were only just getting out on the circuit and I was exceedingly impressed by their playing. They sounded like early Genesis and that is just what I wanted to hear.

All comments are welcome. Comments are moderated only to keep out the spammers and all valid comments are published, even those that I disagree with!